IN 2017, COMPLETING A THREE-YEAR BRL 70 MILLION INVESTMENT CYCLE, KLABIN EXPANDED ITS ACTIONS IN RESEARCH, DEVELOPMENT AND INNOVATION, SEEKING TO ADVANCE MORE SUSTAINABLE APPLICATIONS FOR ITS PRODUCTS AND ENTER NEW MARKETS

The evolution of Klabin’s competitiveness, from the productivity of its forests and industrial processes to the management of impacts on its value chain, is directly linked to ongoing investments in Research, Development and Innovation (R&D+I).

—  Innovate to do more and better 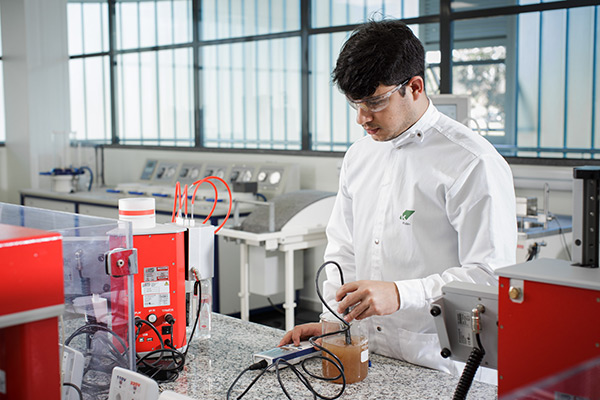 The evolution of Klabin’s competitiveness, from the productivity of its forests and industrial processes to the management of impacts on its value chain, is directly linked to ongoing investments in Research, Development and Innovation (R&D+I). In 2017, this strategic front, which includes Research and Development, was expanded and began to guide a movement to change the Klabin culture. Thus, Inova Klabin was created. Effective in 2018, the program encourages innovation and collaborative work to develop an innovation-friendly ecosystem.

The first Inova Klabin week was held in 2017, included participation by leaders, clients, suppliers and partners, who discussed the future of the paper and packaging market and Klabin’s responsibility within this scenario. Then, Board meetings were held to discuss including open innovation in the company’s agenda. In addition, drives were established to guide the process as of 2018. Furthermore, the Innovation and the Industrial Intelligence/Automation Departments were created and work together with the R&D team in an integrated development ecosystem.

With demands from increasingly challenging markets, Klabin has expanded its focus on Research & Development, understanding that this is an important technological aspect of innovation.

Investments in R&D+I between 2015 and 2017 included partnerships with domestic and international research institutes and universities; physical structuring of the laboratories; equipment purchase; training and recruitment of staff, and the installation of the Technology Center (learn more in “Best Practices” at the end of this chapter), established in June 2017 in Telêmaco Borba (PR), supplementing the activities conducted by the Forest Technology Center, in the same municipality.

—  Generation of value in the production chain

The operations of the R&D+I department focus on all stages of production within the company, with emphasis on the following aspects:

Klabin develops studies with the support of universities and research centers in Brazil and abroad, aimed at finding solutions to market needs.

—  It for operational efficiency

To support the operational efficiency of its business model, Klabin has implemented a robust and innovative Information Technology (IT) Department, with processes and solutions that contribute to reducing costs and waste, assist in the decision-making process, and guide the company on the path towards digital transformation.

The so-called Internet of Things has led Klabin to invest in equipment focused on productivity and cost reduction. In 2017, a data management system was installed as a pilot project, allowing the company to monitor the performance and status of all industrial equipment and schedule maintenance activities in advance, thus avoiding unexpected stoppages and costs. In 2018, pilot tests will be carried out with harvest machines at the forestry area.

Additional action fronts from the IT and infrastructure area include: 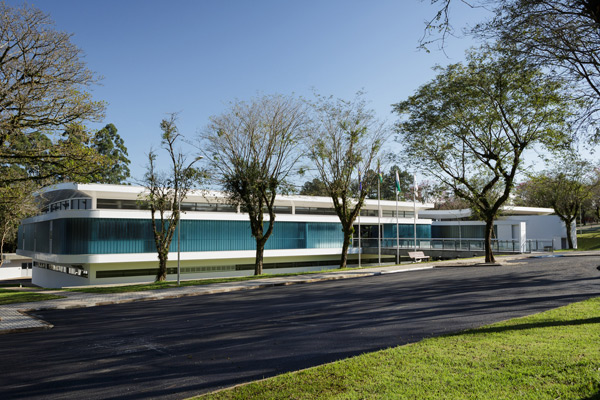 The Center of a lot of attention

The bold and modern architecture featured by the building established in Paraná is the most visible sign of the importance Klabin has placed in Research, Development and Innovation for its processes and products.

Just two months after its inauguration, Klabin’s Technology Center already made its purpose clear when it hosted Klabin’s 1st Innovation Week, on August 15-17. It took the opportunity to discuss sustainable applications and new technologies for the packaging, paper and pulp business. Employees, partners, suppliers, customers and guests discussed innovation in forums and panels.

More than emphasizing the proposal for a space open to innovation and knowledge, the event, as well as the establishment of the Technology Center, took the company’s RD&I to a new level. This path began in the early 1980s and for at least seven years has been seeking to ensure that the company has the most advanced technology to improve its processes and products. 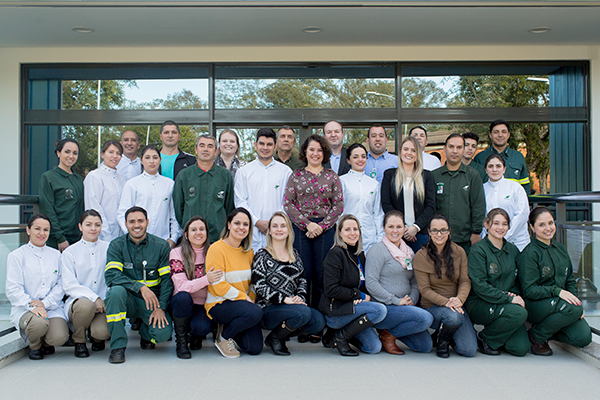 The Corporate Manager of R&D, Carlos Augusto Soares do Amaral Santos, who has worked at Klabin for seven years, is proud to have been an early supporter of this initiative. “I joined the company in 2011 to work on the Puma Project. When the R&D Corporate Department was created in the same year, I was assigned to this new area. It was just me when I started, but gradually the company noticed that it needed to establish a corporate R&D team, and part of the Process Engineering team came to work with me”, he says.

Carlos fondly remembers that the team started working in a house in Harmonia, Telêmaco Borba. “My wife visited the house once and saw the equipment, the staff cleaning up, working. She saw the tables, the kitchen, and she got all emotional”, he recalls. “She knew how important it was for me”.

>> IN SEVEN YEARS, WE EXPANDED FROM ONLY ONE PERSON IN THE DEPARTMENT TO A TEAM OF NEARLY 100 PROFESSIONALS <<

Upon visiting a company in the sector, it became clear that the research area needed to be installed outside the plant. That was the inception of the idea that would later become the Technology Center. Soon after, the projects were developed, based on a modern structure and design, with state-of-the-art technology.

Over the years, the team has been structured in two areas – Forestry R&D and Industrial R&D –, and since then the team has grown, based on internal succession processes and market contracts. “In seven years, we expanded from only one person in the department, to a team of nearly 100 professionals”, says Carlos proudly.

The new Technology Center is considered one of the segment’s most modern centers in Brazil when it comes to equipment and infrastructure, able to reproduce the manufacturing process, from the wood yard to the final product. The Center is located 12 km from Klabin’s Forestry Research Center, established since the 1980s and whose labs were revamped under the BRL 70 million investment plan made in the last three years, supplementing the forestry research. Klabin maintains a national and international network of partners, including technology incubators, research laboratories and universities.